When FOUR PAWS began its work in Albania in 2015, more than 30 bears were living a miserable existence, cooped up in tiny cages next to restaurants or hotels where they were put on show for tourists.

These confined conditions in an environment unsuited to their species is very stressful for the animals, physically and mentally. Consequently, many of the bears were in poor overall condition and were emaciated or displayed behavioral disorders.

In March 2016, FOUR PAWS signed a declaration of intent with the Albanian Ministry of Environment. The goal was to find a permanent solution in line with animal welfare standards of the many Albanian bears living in captivity in catastrophic conditions.

Since 2016, more then 30 bears have been rescued in cooperation with the Albanian authorities and other animal welfare organizations. These saved bears have been transferred to wildlife rescue centers across Europe. Ten of these bears live in FOUR PAWS' bear sanctuaries and partner projects in Kosovo, Switzerland, Germany and Bulgaria.

Our plans in Albania

Currently there is only one bear left that is kept and publicly exposed close to a restaurant in Tirana. In cooperation with Albanian authorities, FOUR PAWS is working on a solution for 'Albania’s last restaurant bear' in order to end this cruel exposure and abuse of bears for entertainment purpose in Albania for good.

Still, the work of FOUR PAWS in Albania is not yet done, as there are reports about bears being found orphaned in the wild and ending up in illegal private keeping or being abused for other illicit activities every year. FOUR PAWS is reiterating its urgent call for the establishment of a wildlife sanctuary in Albania in order to help these bears and other native wildlife species in need of rescue and professional care. FOUR PAWS considers the establishment of a sanctuary as essential for the law enforcement and accommodation of native wild animals in a species-appropriate environment. In addition, such a project will play a key role in raising public awareness for the needs of these animals, and wild fauna protection in general. FOUR PAWS repeatedly offered to support the Albanian government in its efforts to build such a facility, and the Albanian Minister for Tourism and Environment expressed his commitment for this project several times but without any consequences.

FOUR PAWS rescues bears from a tiny cage in Albania

A new beginning for bear Dushi at our BEAR SANCTUARY Müritz

A new home for one of Europe's saddest bears

FOUR PAWS becomes official member of the newly established National Wildlife Council in Albania. The role of this council, comprising members of several national institutions and authorities as well as NGOs, is to act as consultative body for the Ministry of Tourism and Environment in Albania for wildlife management & conservation topics. In frame of its membership, FOUR PAWS will continue to push for better animal welfare in Albania and also advocate for legal improvements concerning the wildlife protection and conservation. 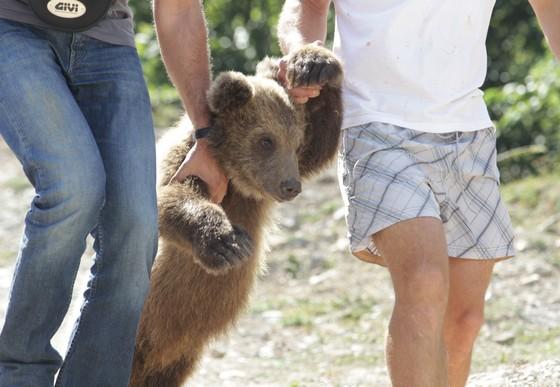 An investigation published by FOUR PAWS reveals that the illegal wildlife trade in Albania is out of control: More than 35 advertisements offering protected wild animals and exotic animals for sale were found on public Albanian online market portals! Furthermore several wild animals (including the highly rare Balkan lynx) were found killed and stuffed in restaurants. Following these findings, the Albanian Minister of Tourism and Environment, Mr. Blendi Klosi, expressed his resolve to take serious measures against illegal hunting and commercial wildlife trade. A. o. the Minister ordered the establishment of a special task force to which NGOs can report their concerns and suspected cases of wildlife crime. Also, he promised to bring up and discuss possible measures against wildlife trade on online market platforms with the relevant national authorities. Read more in our press release! 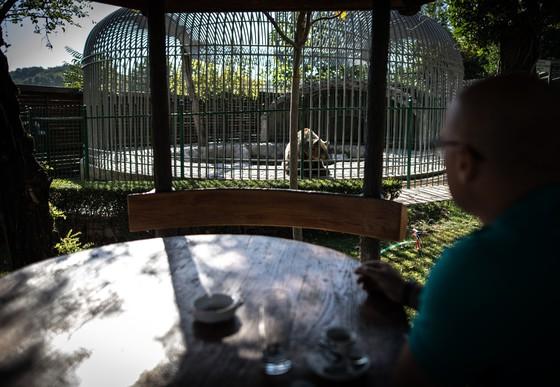 Thanks to the efforts of several international animal welfare NGOs and sanctuaries in recent years, the number of #saddestbears in Albania decreased significantly. Now there is only one bear left that is kept close to a restaurant in Tirana. In cooperation with Albanian authorities, FOUR PAWS will work on a solution for 'Albania’s last restaurant bear' and end this cruel exposure of bears for good! 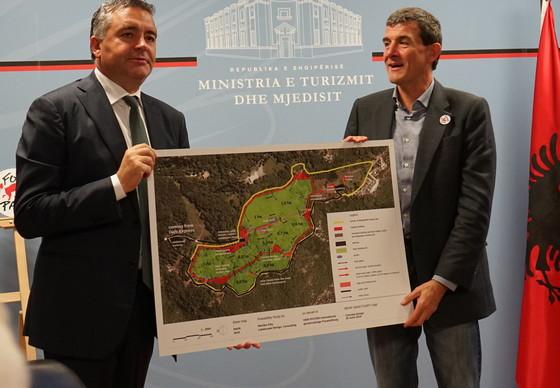 FOUR PAWS handed over the feasibility analysis for an Albanian bear sanctuary & rescue centre to the Albanian Minister of Tourism and Environment, Blendi Klosi. It is task of the ministry now to realize and implement these plans in the foreseeable future. Of course FOUR PAWS will further monitor and support this process. 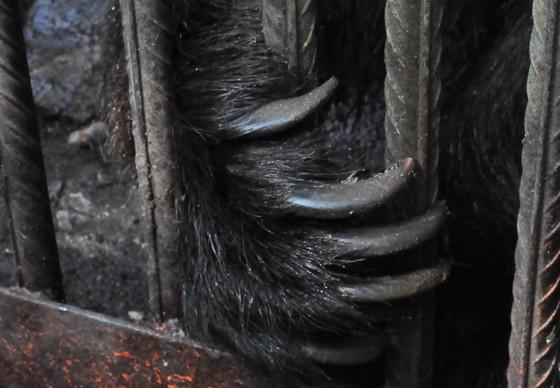 Success: After years of advocating and campaigning from several national and international NGOs incl. FOUR PAWS Albania makes a big change to toughen measures against environmental crimes!The Criminal Code of the Albanian law has just been amended with a list of punishable offences for environmental crimes, which means that delicts such as killing, poaching or illegal trade of protected species can be sentenced to several years of prison now. Before now, such crimes were only punished with a low fine.Furthermore, the 'Law on wild fauna protection and preservation' was amended. As a result, a 'National Council on Wild Fauna' will be established whose task will be mainly to monitor and contribute to the implementation of the new law. 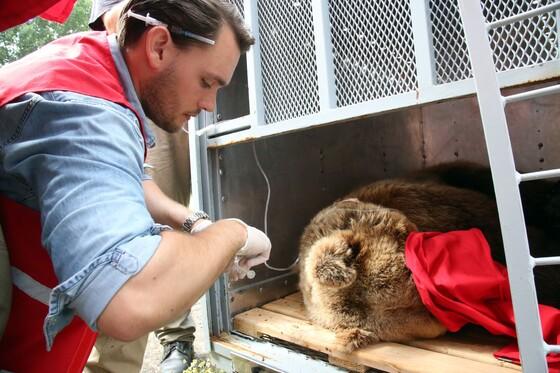 Rocco has arrived in BEAR SANCTUARY Mueritz. After a long journey, the rescued bear from Albania is finally at his new home.

A three-legged bear named Dushi (rescued from the Safari Park Zoo in Fier, Albania in October 2018) arrives at BEAR SANCTUARY Müritz in Germany. Shortly after her arrival to the sanctuary she begins exploring her new environment. 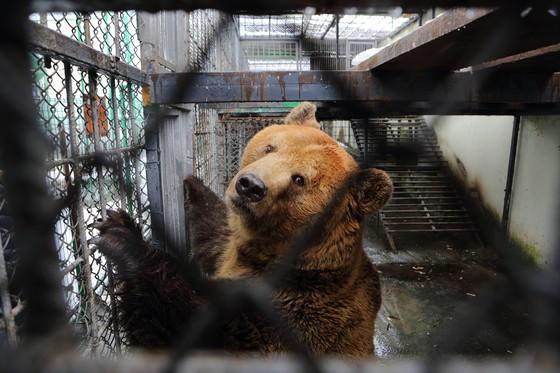 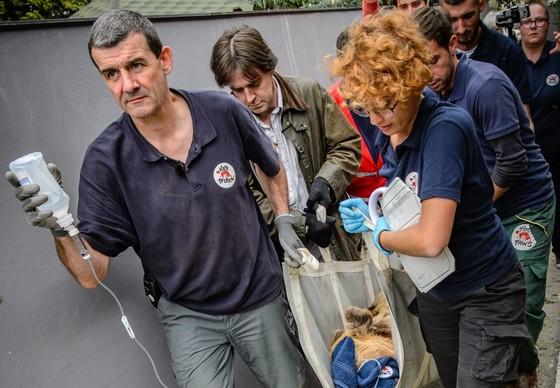 Together with the Albanian authorities, FOUR PAWS saves 12 wild animals, including three lions and a bear, from 'Europe's worst zoo' – the illegal Safari Zoo Park in Fier. The animals are temporarily sheltered in the capital at Tirana Zoo. 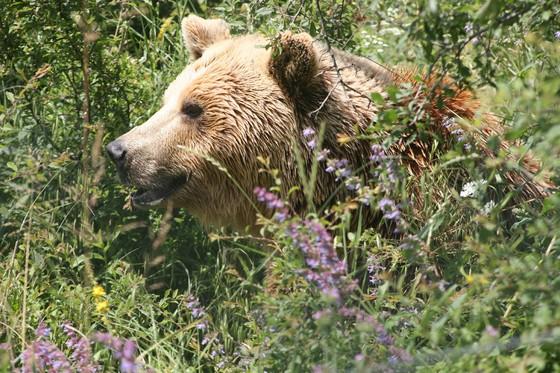 BEAR SANCTUARY Prishtina opens its new environment education center. The Albanian Ministry for Tourism and Environment again stresses its intention to build a bear and wildlife sanctuary near Tirana in cooperation with FOUR PAWS.

More than 25 bears have been rescued in cooperation with Albanian authorities and other animal welfare organizations. These animals are transferred to wildlife rescue centers abroad. 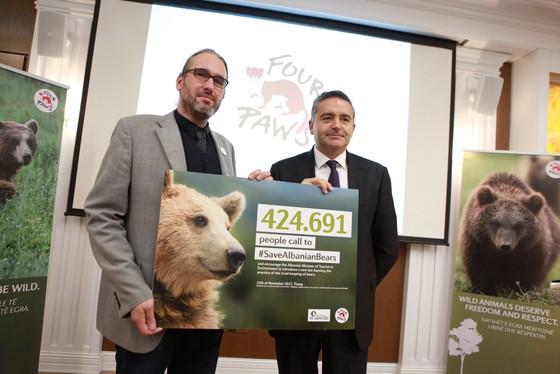 FOUR PAWS submits 424,691 signatures demanding a state ban on the cruel keeping of bears in Albania to the new Albanian minister of tourism and the environment.

A total of six bears rescued in Albania live in FOUR PAWS' bear sanctuaries in Kosovo, Germany and Bulgaria.

FOUR PAWS transfers bear Riku to DANCING BEARS PARK Belitsa. Previously, Riku was kept as a 'pet' in an Albanian mountain village. FOUR PAWS had freed Riku, who was kept chained in a small hut, in December 2016.

FOUR PAWS becomes a member of the 'Save Albanian Bears' coalition. Together, animal and environmental protection organizations and state institutions advocate to end the cruel keeping of bears in captivity in Albania.

FOUR PAWS rescues two bears from life in terrible conditions: 'amusement park bear' Luna and 'selfie' bear Jeta, who was kept in a small shed next to her owner's house.

FOUR PAWS launches an online petition in order to draw attention to the suffering of the caged bears in Albania. The petition appeals to the Albanian Ministry of Environment to introduce legal amendments to protect animals.

The sad story of 'Tomi the beer bear', who was held captive in a small cage next to a restaurant, goes viral around the world.

FOUR PAWS signs a declaration of intent with the Albanian Ministry of Environment with the joint goal of finding a permanent solution in line with animal welfare standards for many Albanian bears living in captivity in catastrophic conditions. 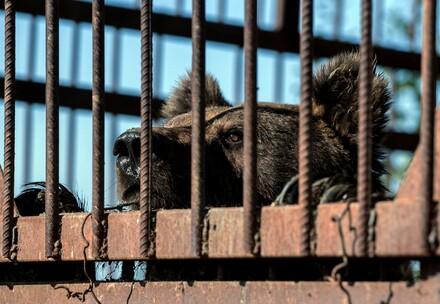 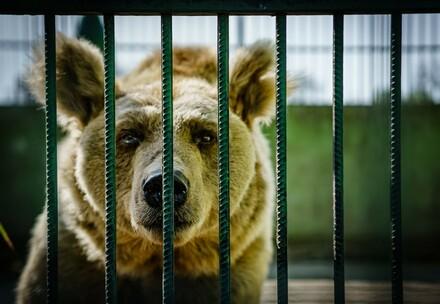 A peaceful oasis for bears in Kosovo