In 2006, when Leo and Melanka were just a few months old, they were bought as ornaments for the country residents of the President of Ukraine. For a long and lonely 14 years following, the two bears lived without shelter in a barren cage with their food thrown over the bars and their excrement left on the floor beneath them. When the President of Ukraine – Victor Yanukovych – resigned from office and left the country due to public pressure in 2014, the two bears were left in the residence along with their offspring. Sadly, their offspring disappeared soon after that.

Since finding out about the bears, FOUR PAWS has been fighting for a long time to rescue them and give them a new home, with space to roam and grass beneath their feet at our BEAR SANCTUARY Domazhyr. In September 2020, with floods of email protests to the State Management of Affairs in Ukraine, we were finally given the official green light and the bears were able to be rescued and brought to their new lives at our sanctuary.

The rescue of the bears went very smoothly and everything went according to plan. Following a vet check of both of the bears, Leo and Melanka were loaded into their transport boxes and started the 4-hour journey to their new homes awaiting them at BEAR SANCTUARY Domazhyr. When they arrived, they were gently released into the indoor boxes of the bear house. Usually, after rescues, bears can be stressed and nervous, but at everyone's delight the bears were calm and Leo fell asleep directly into a bed of straw laid out for them. Both the bears showed a good appetite, and particularly enjoyed the delicious raspberry leaves given to them by the team!

After a few days to settle, the two bears were released into a larger forest enclosure, where they are able to enjoy species-appropriate behavior, such as scratching on trees and exploring the forest. The team at Domazhyr are extremely happy with the bear's progress and have described the bears as very quiet, curious, and lovely bears!

Leo and Melanka were released into their large, roughly 3 acre enclosure at our BEAR SANCTUARY Domazhyr. They were very happy to see their big pool and didn't waste much time jumping in and enjoying a nice swim together. So far, Melanka seems to be the more cautious of the two while Leo is quite happy exploring every part of his new enclosure.

Both bears have a great appetite and their favorite treats at the moment are salmon and peanuts. With their love for raspberry branches and leaves, the onsite team is planning to plant some raspberry bushes in their enclosure next year.

To all the supporters who made Leo’s and Melanka's rescue possible. This is for you. Watch and enjoy. 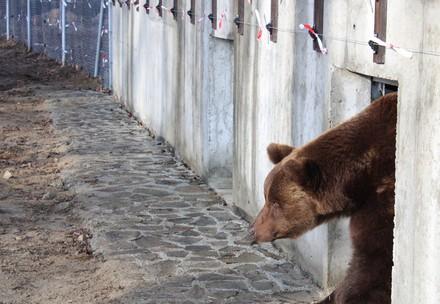 First steps in his new life 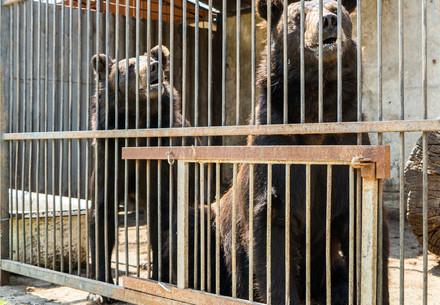 A long life of happiness awaits them 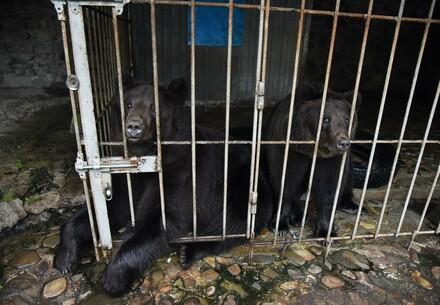 Born for entertainment, these two restaurant bears knew nothing else – now they begin a new life!